Thin Wire: A mother's journey through her daughter's heroin addiction by Christine Lewry 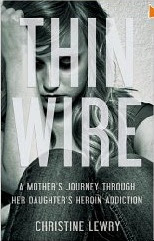 At seventeen Christine gave birth to Amber. It was tough and overwhelming to be so young and have a child to care for.  Christine made up her mind to make a good life for Amber and herself.  Things are going well until Amber begins to get a little wild. Trouble at school became a regular thing.  Christine deals with it all but her bond with her daughter isn't quite as strong as she'd like.  Life moves on as Christine marries and has two more children.  Amber's troubles become even more intense as she begins doing drugs.  It's at this time Christine finds out she has cancer and that her daughter is addicted to Heroin.  Christine's instincts kick in and she begins to help Amber, as much as she can, to get clean.  Amber's addiction is bad but eventually it will get even worse.  Neither realizes the problems  ahead.

Amber's addiction tests her mother's love, patience,marriage and sanity.  In this true life story, you'll find out the lengths to which a mother will go to keep her child safe.  I was amazed at the tenacity Christine has.  I felt she and Amber were honest with their thoughts and feelings about what happened during this time.  This is a story of growth, love and testing the limits.  This book is one where you'll go back and forth at times. Sometimes on Christine's side and sometimes wondering how she can continue on the path she's chosen. The same with Amber. There will be times you want to help and hold her, others where you'll want to shake her senseless.  This is one all parents should read but especially those whose children have chosen the path of drugs.

I did find one issue. I didn't feel it really showed how much of a strain on the family it was. How Christine was pulled in two directions.

I gave this one 5 out of 5 books because it is honest and direct.
Posted by kissablysweet1 at 5:10 PM 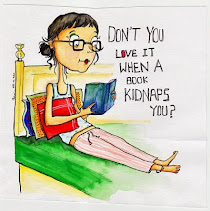 Unknown
AuthorBravo! Now this is a professional who knows her stuff. Straight forward and honest and objective. You can't ask for anything more.